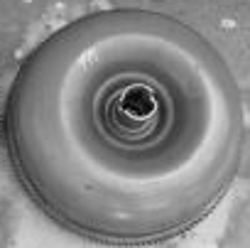 When I first purchased Bob’s Bad Binder it was supposed to be a running Scout II that just had some problems passing emissions.  Once it was home we discovered there were more problems, there was one cylinder that had no compression and as we later learned, a hole in the piston.  The engine was rebuilt, and while we were at it we decided to rebuild the transmission (I can’t recall now if the tranny was actually broken, or if we just decided to do it at the same time).  I had rebuilt a few transmissions before, mostly TH350s and 400s, but figured we could build the 727 too.  Unfortunately, this was not the case, and I put that transmission in and about a half a dozen times before finally taking it to a shop and having it fixed.  Since then it has worked fine, but on the trail it’s always had a strange issue.  The truck has a very difficult time starting off from a dead stop.  If you stop right before an obstacle, it can be very difficult to get up and over it, the engine just won’t be able to get any rpm and it won’t move.

My theory about this problem has long been that it was a torque converter issue.  I have read comments that said the 727 transmissions typically used a very low stall converter (I have no idea if this is actually true).  The Binder’s 345 has the biggest cam Isky makes for an IHC engine (which isn’t really all that big), so the power curve has moved up some.  If the converter is set to stall extremely low it’s possible the engine can’t build any power before the stall, and won’t move the truck.

So the question is, what kind of converter is needed?  What is the best stall speed?  Fortunately, there is an article that answers that question over at Binder Planet

But in my experience, 1800-2000 RPM stalls are a good middle-road stall that gives noticable benifets and few drawbacks. Which is why I use that speed almost exclusively.

He has good reasoning and I encourage you to read the whole article and leave a comment if you agree, disagree or have other ideas.